Maxi and Mini were found by army personnel at Ballykinler Base, Dundrum on July 19 2013. They were reported as two small pups moving together far from the main colony. When we arrived the pups were still together on the beach, several hundred yards upstream from the main colony. Judith from Exploris (our N. Ireland aquarium, where seal rehab is regularly carried out) met me at the site. We both agreed that the pups were 'orphans' who would have lost their mothers  shortly after birth. We estimated the larger of the two pups to be about birth weight, while the smaller pup appeared underweight.. Both pups had lost their umbilical cord, but appeared to be in good condition, so we estimated their age at about 3-5 days. Exploris was already quite full with orphan pup arrivals from elsewhere in N. Ireland, and so Judith was quite happy for the two pups to come to Tara Seal Research for their rehab. Judith's support on the beach was much appreciated. 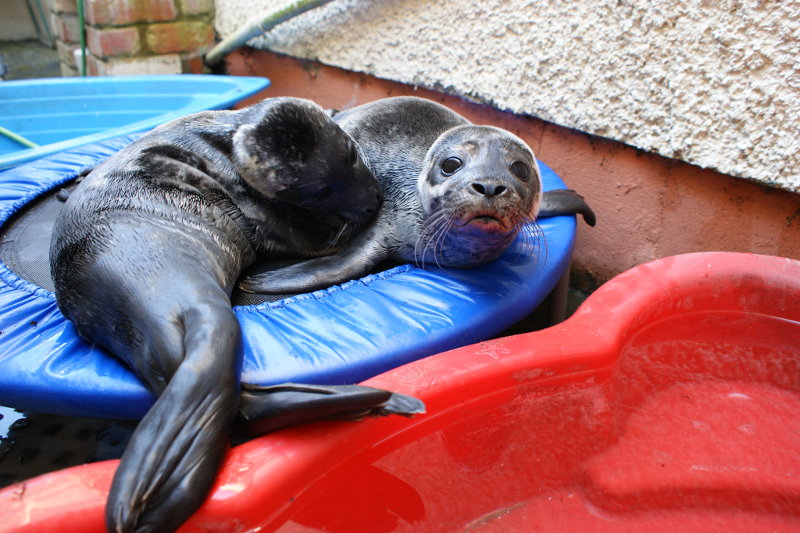 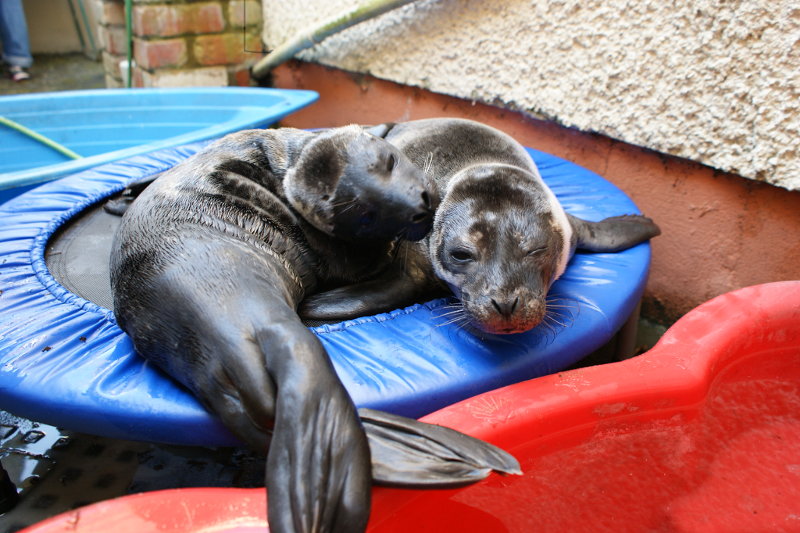 These photos show the pups as soon as they arrived at TSR on July 19.  The pup on the right is Maxi, a male, who weighed 11.1 kg. The pup on the left is Mini, a female, who weighed 9.0 kg. 11 kg is average healthy birth weight for harbour seal pups, so our guess on the beach was quite good! Maxi amd Mini were originally temporary names while we thought of something rather more special - but somehow they just remained as Maxi and Mini!

As is evident from these photos, the pups were closely bonded to one another even at the time of their rescue. It is quite common for pups who have lost their mothers to follow one another and act to some extent as a mother-substitute for one another. Although they would, of course, starve to death in another day or two without our intervention, they nevertheless provide some comfort to one another. In the upper right photo Mini is nosing the back of Maxi's head - this area of fur produces an odour which is an attractant and involved in mother-pup - or in this case pup-pup - bonding. When a pup is following its mother in the water, it orientates to her back of head, and sometimes rides on her back with its nose buried in the fur of the back of her head.

The pups were fed successfully on our usual multi-milk formula. This is based on a high fat-high-protein milk powder which is almost lactose-free, made by Pet Ag in Illinois. To this we add tinned sardines, mackerel or pilchards (in brine), a small amount of fish oil, and add a special enzyme supplement (Essential Enzymes from Source Naturale). Our thanks to Joan Wright of Kruuse UK, who got us some multi-milk in a hurry, and thanks once again to Carol Stewart of Pet Ag in Illinois for arranging the multi-milk shipment from the US. Many thanks also to Pennine Healthcare, who donated some new feeding tubes.

We have had several pairs of pups for rehab in previous years, and although we have known that the pups spend virtually all of their time together, whether sleeping or active, we have actually never recorded the amount of time they spend together, asleep and active. This time we aimed to try to maintain a complete 24/7 record of their activity budget throughout their rehab period, and set up CCTV cameras to record this. As with previous pairs of pups, Maxi and Mini spent virtually all of their time close together and their activity was almost totally synchronised, whether they were sleeping or active in the water. We will analyse the CCTV record and publish the results on the pups' activity budget along with similar records we have made at other seal rehab centres in the past two years.

Sleeping together (left) and invitation to come into blue pool (right)

Maxi and Mini enjoyed synchronised sleeping, whether in the water or on the trampoline!

The pups always followed each other from one end of the yard to the other. The plastic buckets (empty multi-milk containers) were used a little later for a behaviour test (see below) - they were in the enclosure at this time for the pups to get used to them.