Tinkerbell was rescued from Minerstown on July 4th 2000. She had been observed at the haul-out group being uncared for. When the other seals departed from the rocks on the falling tide, Tinkerbell was left behind. Her umbilicus had worn off, suggesting that she was probably about two days old. We think she cannot have been older than that, however, because of her reasonably good physical condition (she was 9 kg). She arrived at the centre the day after Finn had taken possession of the newly built enclosure.

Tinkerbell suffered from the same delay in multimilk supply in late July, but apart from that she gained weight steadily, and was 20 kg when she was radio-tagged and released with Finn on August 8th. 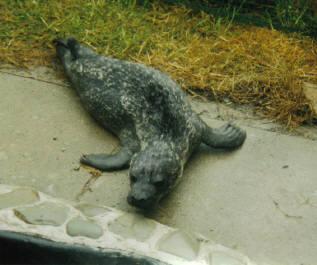