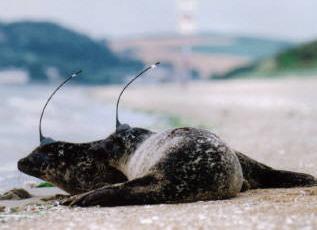 Finn and Tinkerbell with radio tags, at Ballykinler, August 8th 2000
As in subsequent years, we decided to not to release them at Minerstown because of the frequent disturbance there in the summer. Instead, we released them at a large seal haul-out at Ballykinler, which is about 10 km away, still in Dundrum Bay. Ballykinler is an army base with restricted access, and therefore is more secluded than Minerstown. The release was therefore carried out courtesy of the army base. 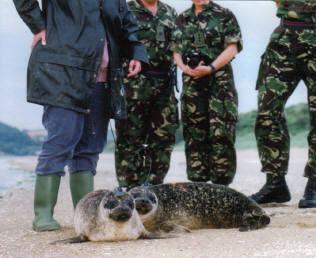 Finn(right) and Tinkerbell(left) looking rather reluctant to venture out into the big wide world
The Ballykinler seal haul-out is located on the sandbanks at the mouth of a small river estuary flowing into the centre of Dundrum Bay. So as not to disturb the colony, we released the pups more than 200 metres upstream. Unfortunately the pups, once released, kept heading further upstream. Of course we didn't want them wandering the wrong way, perhaps into the army base, so more than an hour was spent determinedly turning them around and carrying them a bit closer downstream towards the colony. Then suddenly they 'got the message' swam out to the middle of the channel and downstream, clinging together, in contact, all the while. When they came abreast of the seal colony, they approached directly, hauling out just beneath the group of seals. 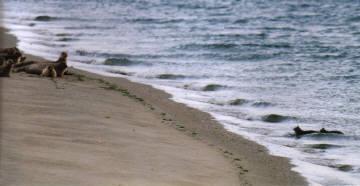 'The aliens have landed' – seals at Ballykinler watch the arrival of Finn and Tinkerbell (right). 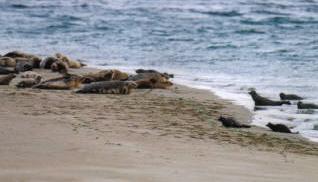 Finn and Tinkerbell (bottom right) haul out. The colony is mostly common (harbour seals) like Finn and Tinkerbell, but there are a few grey seals in the colony. The large dappled seal in the centre foreground is an adult female grey seal.
After making the acquaintance of the seal colony, Finn and Tinkerbell returned to the water and each started to make rhythmic dives just close by, many of which were for over a minute. These dives are very encouraging, because they are a necessary precursor to learning to feed, and means that the pups are adjusting to their new environment. The next day both pups were still diving just off Ballykinler. Thereafter Finn remained close to the Ballykinler site, while Tinkerbell returned to Minerstown, and was detected (with difficulty, because there is no high ground to track from) off St John's Point, close to Minerstown. On August 8th Finn was observed at the Ballykinler haul-out group, dashing playfully in and out of the water before returning to a rhythmic dive pattern.
Unfortunately there had been an error in the construction of the radio tags – they detached from the pups' heads prematurely, after only 4 weeks (The radio transmitter is mounted in acrylic. This should then have been given an outer coat of epoxy resin, which would bond firmly with the epoxy resin used to attach the tag to the pups' fur, but this had not been done, and therefore the bond was weak). Both pups were still diving at Ballykinler and St John's Point respectively when the last signals were received. A pup thought to have been Tinkerbell was seen asleep on the beach beside the Minerstown haul-out site on October 7th. When disturbed, she reportedly woke up and rushed into the water.