Caelan was so ill on arrival that he was initially kept alone in an indoor bathroom. He ran a high fever and could barely move, and on more than one occasion we thought he was dying. He was treated with antibiotics, and after 10 days he showed such a dramatic recovery that he was able to join Tara in the outside pen. We were amazed to realise that despite his illness, he actually gained 4 kg in the first 9 days!
Caelan was easily recognised with a large white spot behind his right ear. 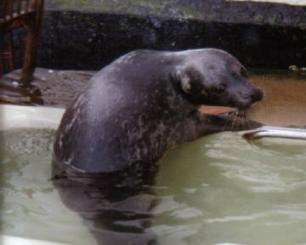 Caelan in the bath while Tara was away at sea

He was an extremely docile pup, responding entirely passively to handling and feeding. However, he very quickly became socially bonded to Tara. From his first day outside, he slept with Tara in the kennel and the pair played endlessly in the bath together. 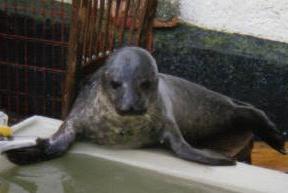 Caelan often appeared lonely while Tara was away at sea
He was tagged on August 11th, weighing 18 kg, and was taken down to the water's edge with Tara, but was not persuaded to enter the sea until August 14th, when he was carried down to the sea while Tara was there also. Caelan started to play with Tara in the shallow water, and the pair gradually moved further out in the bay, swimming and diving together. 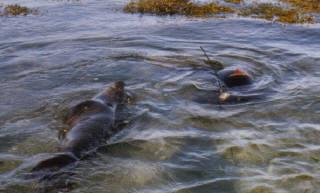 Caelan with Tara in the sea after his final release, August 14th, 1997
Caelan remained in Millin Bay until August 20th. However, both pups left the Bay on August 20th, both travelling in the same direction. Two days later, Caelan swam into the harbour below the pen, looking all round him as if looking for Tara. However, when we called to him, he 'alarm' splashed and swam off rapidly. On August 23rd he was detected off St John's Point, 25 km south of Millin Bay. During September and October he remained mainly in Dundrum Bay, in an area roughly 15 km radius. He was found to be hauled out at Minerstown on two occasions in late October.