At the time of writing (July 16th 2008) we have two pups in rehab - called Piccolo (a male) and Celeste (female). We received a call on Wed. July 9th, from our liaison officer at the Ballykinler army base that they had received word that there were four abandoned pups at the western end of Tyrella beach (i.e. between Minerstown and Ballykinler). Three of them were apparently in a clump on some rocks, and had been there at least since the previous Friday. The fourth was about 100m away, and had been there at least a couple of days. We went to the scene immediately on receiving the call, but the pups had already been picked up by the army officer, and were in the back of a pick-up truck. Three of the pups were extremely weak and emaciated. The third - still with its umbilicus attached (top left of picture) - was in better condition. 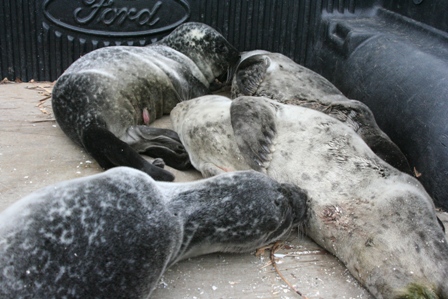 My colleague, Tania Singleton from the aquarium 'Exploris', had also been called to the scene. We decided to take two of the pups each. We took two of the very weak ones (in the foreground of the picture above) who were lying in close contact with one another - Piccolo (centre left of picture below) and Celeste (right)! 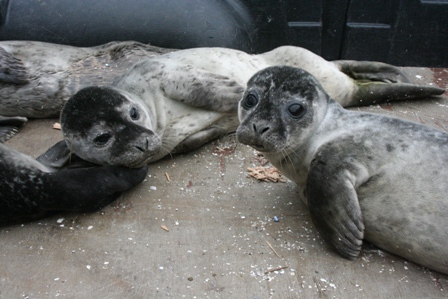 Piccolo and Celeste were taken back to TSR, stopping off with the vet on the way to pick up some antibiotic. We placed them together in an outdoor enclosure, with a mini-trampoline, paddling pool and improvised shelter. Along with their antibiotic, we fed them both a dilute multimilk formula both to rehdryate them and give them some food value. After that they engaged in a session of repeatedly sniffing and nosing one another - which my colleague Brian Black captured on film. The next day (after our scales had received a new battery!) they weighed 10.4 kg (Piccolo) and 9.5kg (Celeste). They were diagnosed with pneumonia on the following day, but were apparently making a good recovery. They entered their paddling pool for the first time on the 12th July and played together for a few minutes before climbing out again, and now they enter the pool several times each day. They have finished their 6-day antibiotic course. On July 15th they weighed 11.9kg (Piccolo) and 10.8 kg (Celeste), so they seem to be thriving. They are completely inseparable - playing and sleeping together. They come to us willingly for their feed. Celeste is angelic when being fed, but Piccolo tries (often successfully) to jerk his head and send his expensive and nutritious milk flying in all directions! 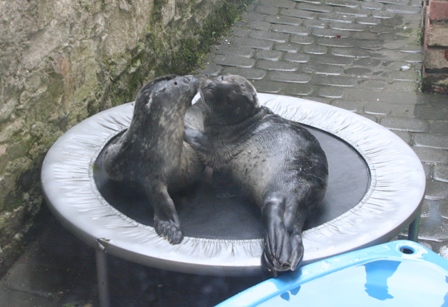 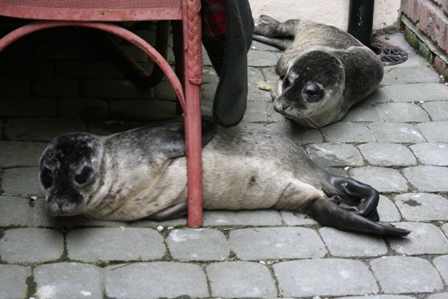 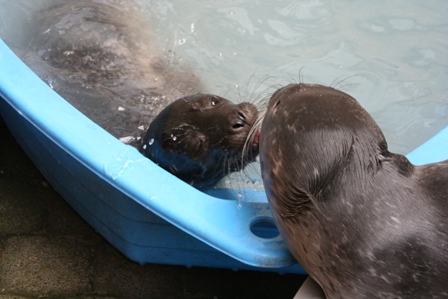 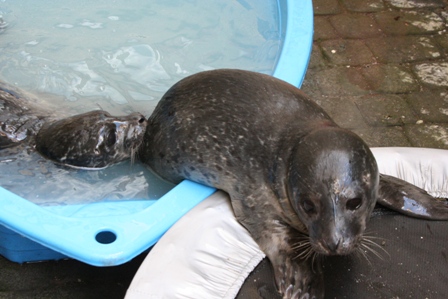 These photos were taken on July 12th. We will keep this page updated with their progress.

Bups pups have settled and seem very content. They play in their pool, sleep and feed. They cry only when they are hungry, usually just just on cue for their next feed,i.e. about four-hourly. However, they do sleep well through the night, usualy to about 7:30am. Today, for the first time, Celeste protested about being woken up for her evening feed. As of yesterday (July 19th) Celeste weighed 11.8 kg and Piccolo 13.5 kg, and they are both beginning to look less like waifs and more like seals. 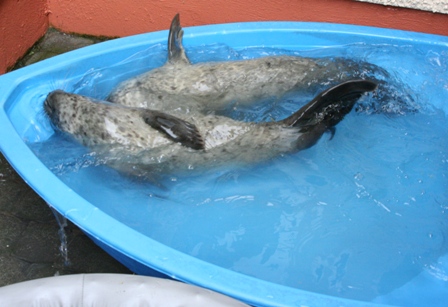 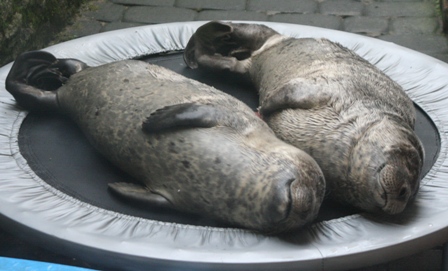 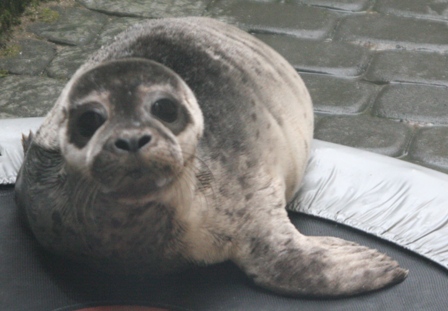 Both pups are doing wonderfully well. Yesterday (30th July - exactly 3 weeks after they arrived) they weighed 15.8 kg (Celeste) and 17.1 kg (Piccolo). As with our previous pairs of pups, they do everything together, and both seem very relaxed, contented and playful, and are two of the gentlest, sweet-natured pups we have had. If all contiues to go well, we are planning to release them around the middle of August. We are reseraching the possibilities of fitting them with small mobile phone tags when they are released - they would then try to send us a text message every few hours to tell us where they are! 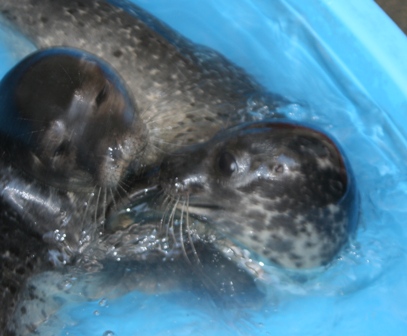 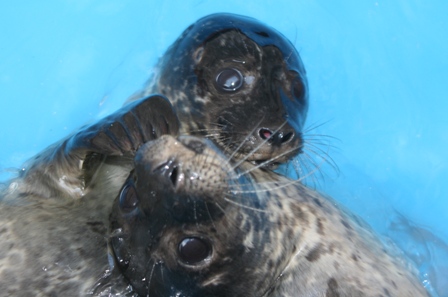 Piccolo and Celeste playing in the paddling pool, 24th July

Yesterday lunch-time Celeste weighed in at 17.9 kg and Piccolo (whom we can hardly lift now!) at 20.8 kg. Celeste is shorter in the body and has a smaller head than Piccolo. When she reaches 20+ kg - probably in about a week - they will be ready to be released. They continue to be a pleasure to care for. They come towards us for feeding and cooperate beautifully with the tube-feeding process. Celeste prefers to lie on her side when swallowing the tube. They enjoy vigorous play bouts in and out of their two pools and on and off their mini trampoline! In the photo below, Celeste is leaning over Piccolo, giving the 'open-mouth play face'. You can just see Piccolo's head (upsidedown) underwater - his mouth is also open - reciprocating the play mode. Common (harbour) seals in the wild enjoy playing in this way in just a few inches of water - so the paddling pool is actually ideal for being the ideal mini-environment to facilitate play behaviour. They also bounce in and out of the water and on to the trampoline when preparing for a nap on the trampoline - again similar to the way that young seals often end a play session with resting on the shore.

Unfortunately our new miniaturised mobile phone tag system will not be quite ready in time for their release around the middle of August. We will therefore have to just mark them - as for the past two years - with a small disk on the top of the head and a paint mark. We hope to spend the next few months developing and testing the new mobile phone tag system and see if we can get it working well and suitable for pups for next summer.

We decided to move the pups to the bigger enclosure with larger pool for the last few days before their release. We introduced them just before their lunch-time - which immediately became a battle with Piccolo, who was much too interested in his new surroundings to be bothered with lunch! Battle over (and some lunch in their stomachs!), together they contemplated the new pool for all of a few seconds before plunging in (Piccolo first, Celeste slightly more cautious). They then cavorted happily all afternoon. 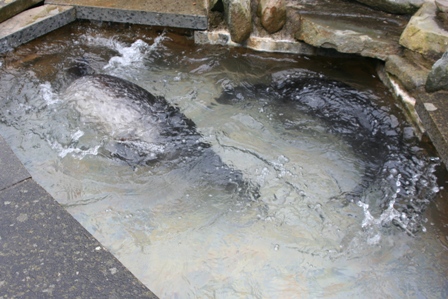 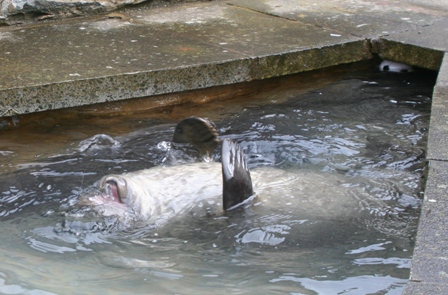 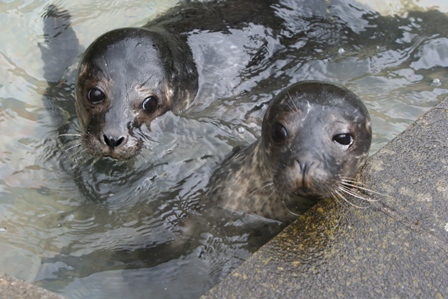 Two days ago they weighed 19.3 kg (Celeste) and 21.8 kg (Piccolo). Today Celeste weighed 20.5 kg, but Piccolo's weight is unknown, since he was behaving so obstreperously in the new enclosure that we were unable to hold him still enough for the scales!

PICCOLO AND CELESTE ARE RELEASED BACK INTO THE WILD! The day finally arrived! Both pups were ready to go. Celeste weighed 21.3 kg and Piccolo 23.2 kg. They both had little plastic buttons glued to the fur of the top of the head, each with our email address (info@sealresearch.org), and PICC for Piccolo and CEL for Celeste. Piccolo also has the letter P painted on his back in cream, while Celeste has the letter C. The buttons and letters make it possible to spot the pups at haul-out sites using a telescope, and also - in the unfortunate event of either of then stranding again - make them identifiable. (Note - we have a licence from Northern Ireland Environment Agency, NIEA, which permits this marking). 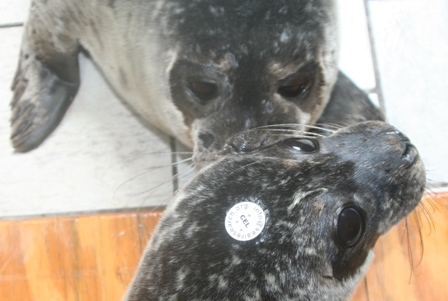 Both pups took the button-glueing process in their stride, and shortly afterwards they had a 20-minute ride in the car to the haul-out site at Minerstown. We thought long and hard about the best place for their release, bearing in mind the number of other seals at the site, levels of disturbance, and also numbers of pup deaths. There is really no ideal spot this year (we decided against Strangford Lough because of the Seagen underwater turbine operation), but Minerstown seemed to be the safest bet. 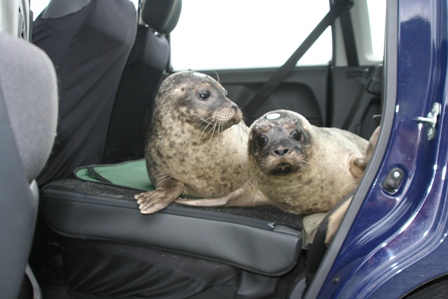 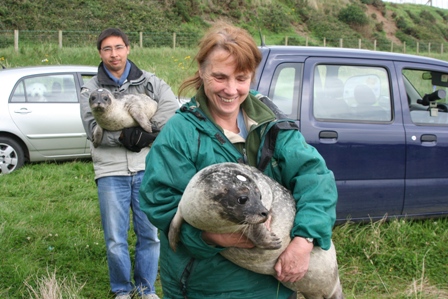 Then it was out of the car and straight on to the beach at 13:20. The tide was ebbing, and there were about 25 common seals hauled out about 200m from the cars. 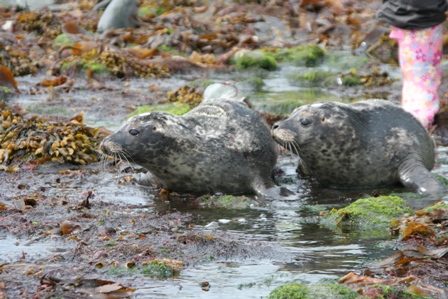 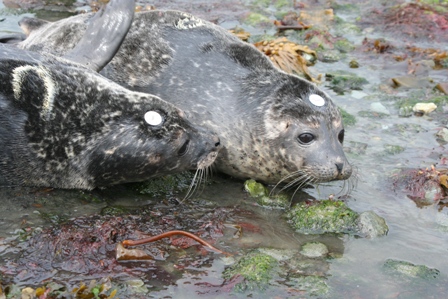 They willingly made their own way across a band of seaweed towards the sea, frequently nosing and reassuring each other. They entered the shallow water at av=bout 13:26. 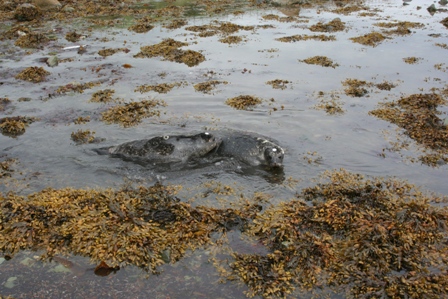 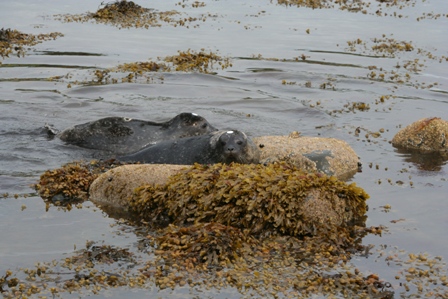 The pups took their time, exploring every inch of the way, all the while constantly turning round to each other and maintaining contact. Their close bond during their rehabilitation weeks certainly helped to boost their confidence during this critical moment of release. It seems to be very beneficial for pups if they remain at the site for long enough to encounter the other seals there and accept it as a 'home base' from which to make their first foraging excursions into the local shallow water. This is much better than if they disappear over the horizon into deeper water - with no prior orientation - as soon as they are released. 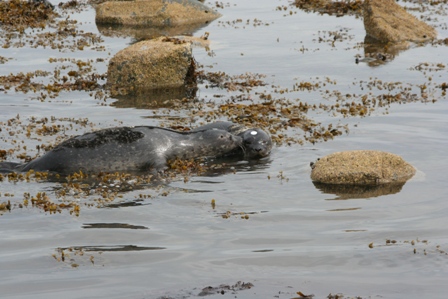 The pups gradually moved outwards,along the edge of the boulders, towards the sea. they first separated by about 10m or so at about 13:45, as they both started making short dives, and Piccolo moved outwards rather more rapidly than Celeste. We left them at about 14:05, by which time they were almost out of sight, diving in the shallow water around the site. We returned at about 18:30 to check that neither had stranded on the beach at low water - but fortunately there was no sign of either of them.

It is disappointing that we are unable to follow their progress by tracking them this year, but we wish them 'bon courage' as they take the first steps into their new lives. All our pups have been beautiful, but these two had particularly attractive gentle natures and appeared to show genuine affection for each other. If we have any further news of them, we will add it in here.

On behalf of Piccolo and Celeste, we thank all our friends for their support, especially Les Black, Brian Black, Christine Rutishauser and Ira Trukhanova.