We found Cecilia on August 13th 1996 at Minerstown. Knowing that sometimes weaned pups (about 6 weeks old by mid-August) sometimes stay behind on the main haul-out rocks after the tide has ebbed and the other seals have moved to other rocks further offshore, we went out to film some pups. We spotted two pups side by side, and to our surprise noticed that one of them was abnormally tiny and thin, with her ribs showing beneath he debated for a few moments and then caught her for a closer inspection. We decided she was probably too small to make the transition to independent feeding successfully. Although most pups start to feed on small fish within about two weeks of weaning, research in Canada has shown that it usually takes about four weeks before the pup starts to maintain its body weight; we felt Cecilia would probably not survive the rest of that learning period unless she had a nutritional boost. We therefor decided to take her back to TRS for a period of intensive feeding. 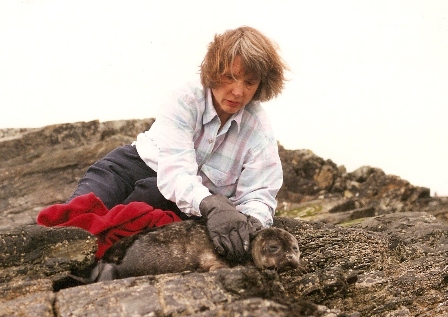 Catching Cecilia at Minerstown for a closer inspection

On arrival at TSR she was found to weigh just ove 11 kg, i.e. approximately birth weight. We collected the first faeces that Cecilia produced, and examined it for fish remains. In fact her faeces contained otoliths (earstones) from about 21 tiny whiting and pollack or saithe, estimated to be about 4 to 10 cm long (i.e. very tiny!). Our initial judgment was probably correct, therefore, that she had indeed learned how to catch and eat tiny inshore fish, but the quantity she was catching was obviously not enough yet to sustain her.

Cecilia proved extremely difficult to handle - this, we later discovered with Leo (2001) seemed to be a characteristic feature of weaned pups! Because of this, she was not weighed again until until the day of her release. Cecilia was tube fed on Multi-milk, but without enzymes or fish oil (since at that time we had not integrated those ingredients into the milk formula). Despite this, she appeared to grow quite well, and we deemed her fit for release three weeks later. 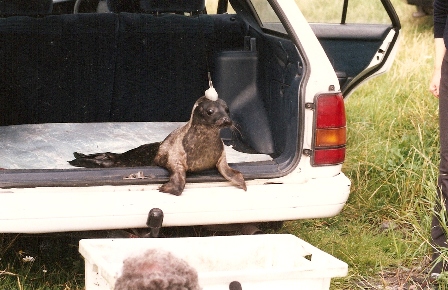 We were somewhat startled that she was in fact only 15.5.kg on the day she was fitted with the VHF tag. Nevertheless, we decided to release her, since she was healthy, and we knew she had already begun to forage before we took her into rehab. Our intention was only to give her a nutritional boost, with just enough body weight to tide her over until her own feeding was sufficient for survival. We released her at Minerstown on September 2nd. 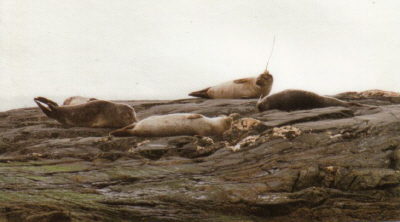 Cecilia (centre back, with antenna on her head) hauled out at Minerstown beside four other pups, all about 9-10 weeks old).

We tracked Cecilia throughout September,and found that she seemed to be foraging normally along the Mourne coast, just to the south of Dundrum Bay. Her foraging dive times were 2-3 minutes, which is normal for this age of pup. Six weeks after her release, she was photographed at Minerstown (October 10, 1996), hauled out in a group of pups of her own age. She appeared to be fit and well, and approximately the same size as her peers.

Thereafter, Cecilia's story is a sad one. The first signs of a problem became evident on October 13th, when she appeared in shore at the Minerstown site. Cecilia seemed to be unable to hold her position on a rock when it was being washed by the waves. Another juvenile seal, estimated to be slightly older (perhaps 1-2 years), appeared to be trying to shield her from the waves, and then, when she was washed into the sea, appeared to chaperone her in the water. On 20th October she was seen hauled out alone on a remote rock. She appeared to have lost weight, and was lying on her right side (c.f. the ohoto taken on October 10, when she was lying on her left side). On October 24 she was found (by means of tracking her) to be stranded at the high tide mark at Minerstown. She was lying on her right side again, and her left shoulder appeared very swollen. Her breathing was shallow and rapid, and she was coughing blood. 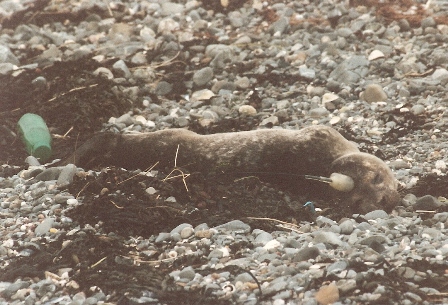 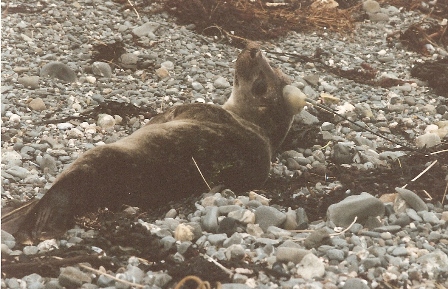 We took her immediately back to TSR, where she was fed by tube and received intensive antibiotic and anti-inflammatory therapy, and was also treated for lungworm (all harbour seal pups get a lungworm infection from the fish they eat, but the number of worms in the lung usually only increases and becomes a problem if the pup is debilitated; since Cecilia was coughing blood, she was assumed to have a severe lungworm infestation). Unfortunately she died three days later.

Post-mortem revealed that she weighed 12 kg, and that the distal region of her left ulna (top of her left foreflipper) was completely fractured, and the flupper was filled with pus. Her lung condition indicated severe parasitic pneumonia, haemorraging and presence of worms. Two bacteria, E. coli and Aeromonas spp.  were found in both lungs and flipper pus, suggesting she had septicaemia.

We  can only assume that Cecilia's condition developed over a period of about 10 days. We presume she must have been hit by something - probably a speedboat or jetski - that fractured her shoulder, but left no other injury. Thus disabled, she was unable to swim properly, dive or forage, and lungworms and opportunistic bacteria then took over. The accident must have happened since she was photographed on October 10, since on that day she was lying on her left side, on the flipper which was subsequently injured.

At the time of writing (May 2008), recreational speed craft continue to be a problem at Minerstown and elsewhere along the Co. Down coast. When we see them hurtling past a haul-out site, we cannot help thinking of Cecilia - and doubtless other pus also - and feeling sad.