Tara was a very special pup to us and the Tara Seal Research Centre is named after her.

Despite bonding quickly with us and trying to suckle on us, we could not persuade her to suck from a bottle. However, she was most obliging about being tube fed, and reached 11 kg weight in 10 days. It was when Tara was newly arrived that we had the idea of adding digestive enzymes to the milk formula, particularly to help her body make best use of the high fat content of the milk, and we were amazed at speed with which she gained weight after the enzymes arrived – about half a kilogram a day. She was extremely sociable and playful and loved to play with the hose.

"More hose please"
- Tara at about four weeks of age
She was tagged and released on August 6th, at 34 days of age, weighing 18.5 kg. 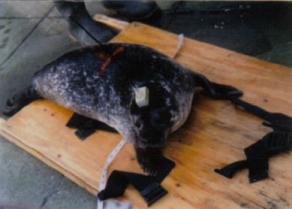 Tara, just after being tagged
Until Caelan was also released on August 14th, Tara went to and fro from the sea on her own volition. While she was in the pen, we tube-fed her as usual. One early morning we were woken by the sound of a pup crying – and found Tara had come back from the sea and was trying to push her way through the closed gate of the pen! We opened the gate and let her in! During this time Tara maintained her weight at about 19 kg.

The day of Caelan's release on August 14th, the two pups swam and dived together nearby in the bay. Thereafter they seemed to swim and dive separately in the bay. Tara continued to return to the pen once a day, but from August 17th we stopped feeding her. Research in Canada has found that wild pups do not eat fish while they are still suckling from their mother. We therefore thought that Tara might not start to feed herself until we stopped feeding her completely. After a further day, she stopped returning to the pen. Both pups left the bay on August 20th. Tara swam to the mouth of Strangford Lough, but thereafter we were unable to locate her until she returned two weeks later on August 29th. She came straight back to the pen, and seemed healthy, but tired. She had, in fact, lost 4 kg. We gave her one tube feed (hopefully an energy boost) and she went back to the sea. She remained, diving, in the bay for a day, and then we managed to track her to the southern Mourne coast, just north of the entrance to Carlingford Lough, which is about 60 km south of Millin Bay. On September 27th she returned to Millin Bay and hauled out just below the research centre. 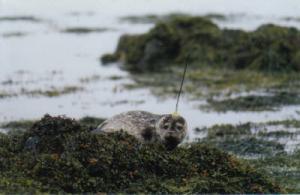 Tara paying us a visit, September 27, 1997
She made three more visits to Millin Bay in October, always at a weekend (on 10/12th, 18/19th and 26/27th)! Between visits she was always found near the mouth of Carlingford Lough. She was found to make the 60 km journey in a few hours, and apparently did not stop off en route in either direction. On October 18th we coaxed her back to the pen, because she had a small lesion on the side of her head where she had been scratching. The vet gave her an antibiotic shot before we released her an hour later, and the lesion cleared up. That was the last time she returned to the pen. By the middle of October she appeared to be quite fat! 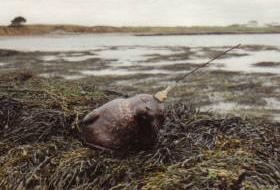 Tara visiting on October 26, 1997
She was first seen to haul out within the seal group in Millin Bay on November 30, 1997. On February 1st 1998 she was seen with the tag having fallen off and she was no longer quite as approachable. She was last seen and definitely identified on May 24th 1998. However, a young seal, thought to be Tara, was seen with the haul-out group on September 6th 2000, and on its own on Tara's favourite rock on September 9th.

In the summer of 2002 (when Tara would have been five years old) the neighbouring children reported being approached quite closely by a seal, which still stayed around while they called to her. On August 2002 a small adult seal swam, together with the newly tagged and released Olly, into the harbour just below the pen. This seal stayed close by while TSRC personnel greeted Olly before they both swam slowly away. We suspect that seal may have been Tara and that she was chaperoning Olly!

Although we were delighted at the evident success of Tara's rehabilitation and release, we did decide in the future to try to release pups at a slightly heavier weight. Tara lost about 4 kg, reducing her weight to 15 kg, in the two weeks after release before she evidently learned to feed successfully. We now try to get pups to be at least 20 kg before releasing them.

It is often thought that it is not good practice to allow young animals in rehabilitation to 'bond' with their carers, since it is felt that the animals may be reluctant to leave human company and their tameness may compromise their survival after release. In Tara's case her tameness did not apparently inhibit her from developing normal foraging behaviour or from integrating with other seals. Her tameness gradually decreased and no problems arising from it were experienced. Her tameness turned out to be beneficial, since she returned to the pen voluntarily when she was exhausted, two weeks after her release, and we were able to give her an extra feed. We were also able to treat her skin lesion two months later. We have tentatively concluded, from Tara and other very tame pups since (such as Finn, Evie and Rona) that tameness in harbour seal pups does not appear cause later problems, although it is probably beneficial for pups to be reared with each other so that they are also able to develop an early attachment to another seal. 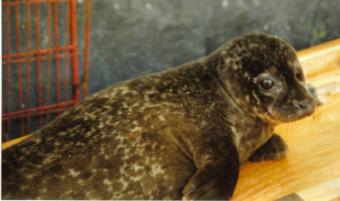