In 1997 we had two pups. The first, Tara, was found (by a neighbour's dog!) on July 3rd, crying on the beach near our research centre. She was probably less than a day old and weighed only 8 kg, which is underweight by about 3 kg for a newborn harbour seal pup. 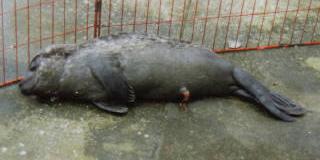 Tara, on arrival at about 1 day old

Caelan was rescued from the Minerstown haul-out site on July 15th. He was extremely emaciated, weighing only 7.5 kg, and had probably been abandoned at birth a few days earlier. 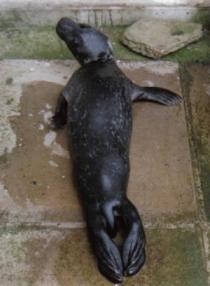 Caelan, on arrival at less than a week old
His had an infected umbilicus and was so ill on arrival that he was unable to join Tara in the pen for another 10 days. However, as soon as they were introduced they quickly became bonded, sleeping together in the kennel and playing together in the bath. 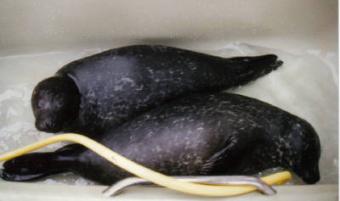 'Of course there's room for both of us – just fill it up..........'
When Tara was tagged and released on August 6th Caelan still weighed only 15.5 kg, so he was not tagged at the same time. He appeared to be quite disconsolate while Tara was away at sea, but fortunately for him, Tara decided to come back to visit every day. Every time she came back, the pair had a joyous reunion in the bath. We thought it was quite humorous and touching that Tara should be so keen to jump into the bath with Caelan when she had the whole of the Irish Sea at her disposal!
Read more about Tara
Read more about Caelan